Cam Newton wants you to eat this vegan chicken

Brock, 29, introduces his new counter service counter as the world’s first fully vegan hibachi grill. In collaboration with chef Allan Katzef (Baked Kitchen, future tenant of Food Works), he has developed a menu that replaces the traditional beef, shrimp and chicken with vegetable proteins. An impossible burger replaces a steak; Fake shrimp are made from konjac root.

In classic hibachi style, the main dishes (including tofu and mushrooms) are served with a massive amount of fried rice, sautéed vegetables, scribbles of homemade yum yum sauce, and a sprinkle of chives and sesame seeds.

Brock said the food court initially passed on his concept. On the second try, he cooked for them and got a big boost. “They kept asking if it was really vegan. I was like, ‘Yes, it’s 100 percent vegan.’ “

I got a response similar to “chik’n”. The “shr’mp” looked like the real thing, and the texture didn’t bother me. I think what really turned me on is the gigantic box of fried rice, veggies and that yum yum sauce!

One thing you won’t find at Hippie Hibachi is showmanship. “Too busy,” Brock said. In addition, the grill faces the rear wall.

CALL FOR ALL PLANTS: At the height of the pandemic, Luis Hernandez of My Abuelas Food invited Ivonne Lara of the vegan Mexican pop-up Veganx to cook at his Puerto Rican restaurant at Spindle.

Their herbal collaboration was a success, so they launched Bien Vegano ATL, an outdoor market for vegan vendors.

To exploreVegan and Vegetarian Restaurants to Try in the Atlanta Subway 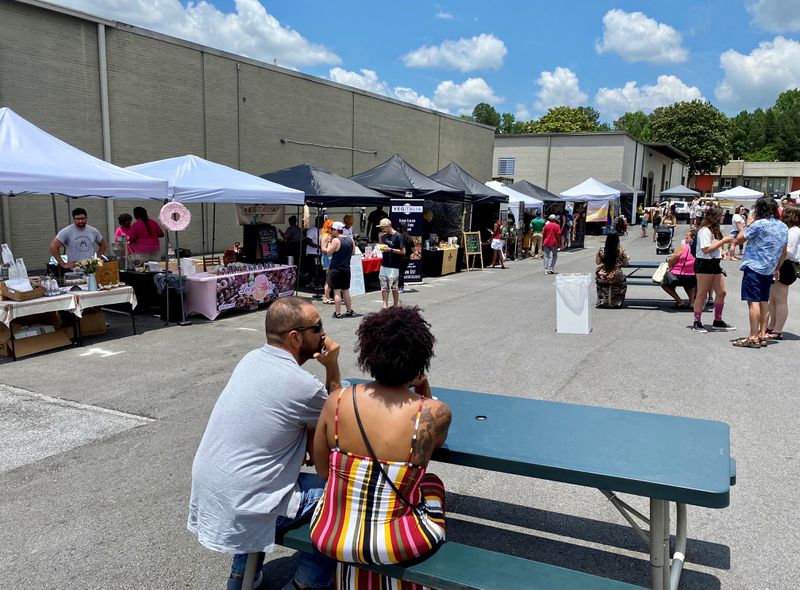 Bien Vegano ATL’s June installment took place at Second Self Beer Co. in the Westside. The next vegan market will be on July 25, also at Second Self. Wendell Brock for The Atlanta Journal-Constitution

When it kicked off in December, Bien Vegano drew 27 sellers. At the July 25 event at Second Self Beer Co., they are expecting 60, which is a testament to the growing herbal movement in the metro area.

“What’s really special about Bien Vegano is that a lot of the people who come to our markets are actually not vegans,” said Lara. “I love that we’ve created a space where all people feel comfortable and accepted enough to go out.”

I can attest to that.

Last month I stopped by for a look, had a beer and hit the sidewalk. I was blown away by the variety of offerings: banana pudding, pie, flan, donuts, tea, coffee, juice, wings, soups, wraps, smoothies, Italian soul food, po’boys, tacos, pizza – you guys ‘call. Candles, jewelry, cosmetics, clothing, crafts, plants to buy and animals to adopt were also on offer.

My find of the day was Calaveritas, maker of all kinds of tasty Mexican food, including birria. I only had room for one dish – fries topped with birria. And, I was addicted.

Local vegan restaurants are tapping into the plant boom